Posted on 5 years ago by Jonathan(@NE_Jarop) in Images, Screenshots | 0 comments

Tomodachi Life may only be a couple of days away from launching in in the West, but for those looking for some more screenshots / what the early adopters have to say, the official Miiverse is now live. It doesn’t seem overly populated now but I suspect that more posts will start flowing in as it gets closer to release.

Posted on 5 years ago by Jonathan(@NE_Jarop) in News, Wii U eShop | 0 comments

Though the game was just released,  Brain Age’s Miiverse page states that the game will only be available until June 30th. It’s unclear as to why this decision was made but we’ll update the story if anything else surfaces.

Posted on 5 years ago by Brian(@NE_Brian) in 3DS, Screenshots | 2 Comments

Some stages have been shrunk down and made into trophies, like this one of Tortimer Island for the 3DS version. I wish I could have a figurine like this in real life.

Posted on 5 years ago by Brian(@NE_Brian) in 3DS, Screenshots | 2 Comments

Here’s a first look at the bottom-screen display for the Nintendo 3DS. Your name will appear in the area above the accumulated damage. And if you tap one of the fighter displays…!

A Small Miiverse update has gone live allowing for the ability to Yeah comments along with a profile re-design for users. You can check out a video of the update below.

Posted on 5 years ago by Brian(@NE_Brian) in Screenshots, Wii U | 12 Comments

Fight! The Wonderful 100!! We also made trophies of some of the other Wonderful Ones.

Head past the break for Imamura’s full Miiverse message, which covers the points above.

END_OF_DOCUMENT_TOKEN_TO_BE_REPLACED

Posted on 5 years ago by Brian(@NE_Brian) in Screenshots, Wii U | 3 Comments 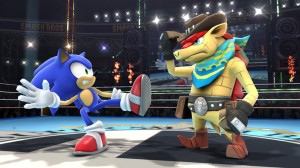 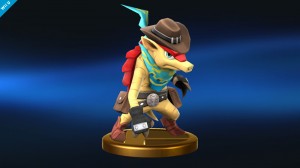 In addition to today’s screenshots, Sakurai passed along the following message on Miiverse:

We didn’t introduce ALL of the Assist Trophies in the Smash Bros. Direct. Here’s Dillon from Dillon’s Rolling Western!! He may rival Sonic in the art of rolling.

This is his trophy. He may be an animal, and his buckles are definitely on the adorable side, but there’s no denying he looks cool!! His Assist Trophy can even do things like a quick charge.

Posted on 5 years ago by Jonathan(@NE_Jarop) in Screenshots, Wii U | 8 Comments

Today’s screenshot gives us a look at tether recovery! Sakurai had the following to say alongside the picture:

Tether recovery? Yes, you can! And from even longer range than before. Multiple fighters can latch on–who actually grabs hold is determined by the same rules as the standard ledge grab.