Koei Tecmo has released first screenshots of the newly revealed playable characters for Hyrule Warriors. As previously mentioned, Cia, Volga, and Wizzro will be added (plus the option to turn off cut-scenes in the menu). They’ll be going live for free in conjunction with a 1.3.0 update on September 30.

As far as DLC goes, we have the following information:

Koei Tecmo is offering a special promotion for Hyrule Warriors players. The four packs can be pre-ordered for only 3,000 yen. Dark Link will be available as soon as the content is reserved.

Apologies for the quality. This was captured during Koei Tecmo’s stream, so there’s not much we can do!

Cia, Volga, Wizzro to be added as playable characters in Hyrule Warriors 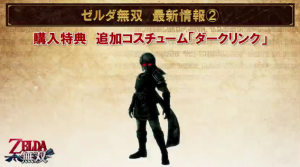 Koei Tecmo announced three new playable characters for Hyrule Warriors during a stage event at the Tokyo Game Show today. Cia, Volga, Wizzro – three enemies in the game – will be available sometime in the future as roster additions.

At this very moment, Koei Tecmo is demoing Cia. We’ll have the footage on the site shortly (though it will be low-quality unfortunately).

Dengeki showed off some footage from Bravely Second during a TGS live stream today. Check it out above.

SEGA’s TGS 2014 lineup is in. At the expo next week, the following games will be featured:

There will also be an Atlus (SEGA partner for the expo) presentation at 2:30 PM  on September 20. It will feature Atlus’ upcoming games include Etrian Odyssey II Untold.

Posted on 7 years ago by Kirara Koneko(@KiraraKoneko) in 3DS, Images, News | 0 comments

The official website for the Etrian Odyssey 2 Remake for 3DS has just been updated with several bits of new information.

Check out the gallery below for the NPC character art.

New records expected to be set for TGS 2014

This year’s Tokyo Game Show could set new records for the event. There’s still a couple of weeks to go, but CESA says at least 417 exhibitors and 731 games will be present. That would be 75 more exhibitors and more than double the number of games compared to last year.