Curious about the different gear abilities offered in Splatoon? Then look no further than the graphic above, which has an overview of the various ones along with descriptions of each.

Splatoon will be available starting on May 29.

Posted on 5 years ago by Matt(@OnePunchMaz) in Videos, Wii U | 1 Comment

Nintendo have published another weapon trailer for Splatoon, this time focusing on the Splattershot. Watch it below:

Posted on 5 years ago by Matt(@OnePunchMaz) in Screenshots, Wii U | 2 Comments

Posted on 5 years ago by Matt(@OnePunchMaz) in News, Wii U | 14 Comments

Well, this is certainly one of the more unique pre-order bonuses I’ve seen in a while. When you buy Splatoon at Target, you get an exclusive Splatoon-branded squirt gun for free as long as supplies last.

Japan now has access to a new Splatoon manga. It’s apparently a one-time feature included in CoroCoro’s June issue. How neat would this be to see on a regular basis?! 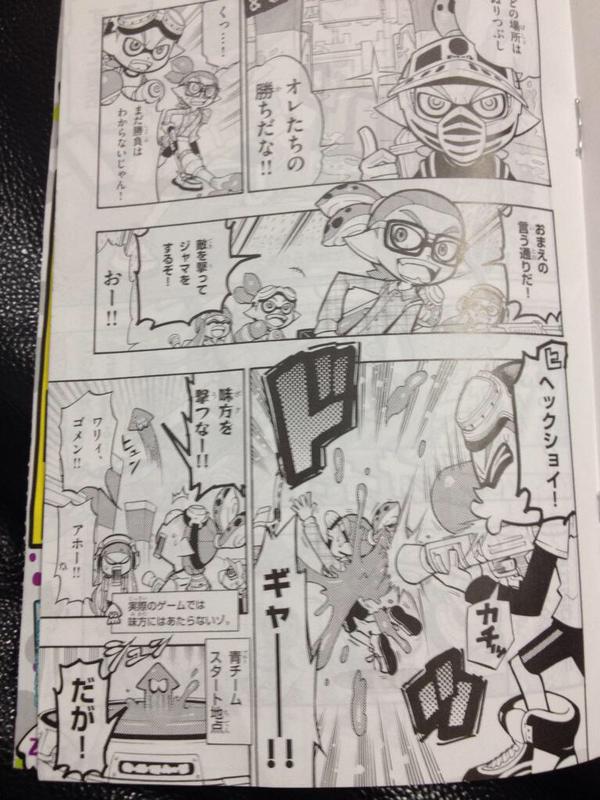 Thanks to Domilego4 for the second photo.

Posted on 5 years ago by Matt(@OnePunchMaz) in Videos, Wii U | 2 Comments

Nintendo have just released a new weapon trailer for Splatoon, this time focusing on the Splat Charger. Check it out below:

Posted on 5 years ago by Matt(@OnePunchMaz) in News, Wii U | 3 Comments

MCV had the chance to sit down with Chandra Nair, Nintendo UK’s marketing manager, to talk about Splatoon. Some excerpts from the interview:

On why a new IP was needed for this game:

“If that idea is best realised with an existing set of characters and an existing universe then perhaps that’s the direction the project will go in. It’s all about the idea and how it’s best turned into a great game. With Splatoon it just so happens that the mechanic of travelling through ink before bursting out and shooting begged for Inklings and Octopians, and for a very different premise to what other Nintendo IP could provide. And so, we have a brand new IP.”

On the fact that Splatoon targets a similar audience to Mario Kart 8 and on Nintendo’s marketing push:

“And by that I mean everyone. We have TV campaigns for kids, 12 to 25 year-old boys, Nintendo gamers and the wider gaming fraternity. We’re targeting Mario Kart 8 and Super Smash Bros owners but we’re using this opportunity to talk to lapsed Nintendo fans, too. Wii U has a fantastic software line-up and there really is something for everyone. There are a whole load of non-Wii U owning, lapsed Nintendo fans out there who will be tipped over the edge by Splatoon.”

“I genuinely don’t know what the magic element is. It’s classic Nintendo though, that spark of magic that you can’t quite explain but just is. As soon as I saw the Inkling Amiibo I wanted them in the same way that I wanted the Yoshi’s Wooly World Amiibo; the same way I needed Charizard and Toon Link… and all the others. Aaarrgghh, damn you Amiibo.”

On the game’s singleplayer modes:

“But there will be a satisfying single-player aspect that sees characters taking part in more traditional challenges. Three Amiibo also unlock a further 60 challenges. Splatoon is a game that you can enjoy on your own or with a friend in the same room. But it comes into its own online.”

Check out the full interview here.

Posted on 5 years ago by Matt(@OnePunchMaz) in Screenshots, Wii U | 0 comments

[Let’s Talk] Your thoughts on Splatoon

Let’s Talk #8: Your thoughts on Splatoon

Splatoon’s release date is fast approaching. Actually, two weeks from today, the game will finally be out on store shelves. How exciting is that?!

Splatoon is a pretty big deal. It’s a new IP from Nintendo, and it’s something different from the Big N. Nintendo itself seems to be promoting it fairly heavy with various commercials in all regions, a dedicated Direct (though it’s true they do that for most games), and even a special demo.

Since we’re so close to Splatoon’s launch, I thought it could be nice to hold a discussion about the game. How do you feel about Splatoon? Has your opinion changed since the original reveal at E3? What’d you think of the Splatoon Global Testfire? Sound off in the comments below!

Just a few quick thoughts from me since I’ve been feeling sick the past couple of days!

I feel like this isn’t the popular opinion, but I’m actually looking forward to playing the single-player campaign more than the multiplayer modes. Don’t get me wrong: I’ll definitely be trying out the various multiplayer offerings. However, I’ve always been more of a lone gamer. That’s just the way I tend to enjoy games!

Everything we’ve heard about Splatoon’s single-player thus far sounds very interesting. I love hearing that it has a lot of variety, and some people have even compared it to Super Mario Galaxy in a way – which is certainly a good thing.

Obviously multiplayer is going to be what carries Splatoon forward. I managed to get in a few rounds last week, and I think what I played managed to sell me on those multiplayer aspects more. I just need more time with the game.

Highlights from last week’s topic: Do you care about amiibo?

I care about amiibo! I’m sick of hearing people complain about them. They’re not DLC- they’re figurines. If you don’t want it for your shelf, DON’T BUY IT. I love the way a lot of them look and I think the in-game bonuses are fantastic and not even CLOSE to DLC. I have a nice collection of the ones I love the most and I have the Splatoon 3-pack pre-ordered.

By the way- just spent the hour playing the Splatoon demo- WOW! They hype is VERY real. That was amazingly fun.

I have 18 on my shelf with seven preordered. I think I kind of like them.

In a strange ironic twist, I have only one amiibo and no real motivation to complete a collection, despite being a completionist (in collections as well as games) to a debilitating point xD

I think several things turned me off from it, namely the modeled appearance versus the actual thing. Of course it was too much to actually assume every factory model one would appear in such a lovely way. The other thing was the one-file-at-a-time functionality makes it a little limiting…

Seeing other comments, I am more than happy to let others who truly enjoy Amiibos buy them (at non scalped prices none the less) rather than buying them and trying to convince myself that I need or want them.

I do, though it didn’t really start until I bought a Peach amiibo for my niece. At first, I decided I was only going to get amiibo for my mains in Smash Bros., Captain Falcon and Shulk, and Sonic since I grew up playing his games, but then my nieces got interested, and then a Pikachu amiibo happened, and then a Zelda, and then Samus too. I’m only really interested in the Smash Bros. line as of right now, but of course that could change in the future. I want a Mewtwo amiibo really, REALLY bad though.

I got the Captain Falcon and Shulk ones BTW, my Gamestop is awesome!

I’d love to see Nintendo make a Amiibo game, like Disney Infinity and Skylanders,
Amiibo-land maybe? (seeing as Nintendoland is taken). Give Amiibos more of a use, instead of just unlocking costumes, weapons, abilities and Smash AI saves. Maybe even have it so they can be added into the Nintendo version of Disney Infinity, Skylanders and Lego Dimensions, that’d be awesome!

Maybe something will be announced at E3?