Fire Emblem Fates Special Edition back up on Amazon Germany

The Fire Emblem Fates Special Edition is available again via Amazon Germany. If you’re seeking a European copy of the game, head on over here

. We don’t know how long it’ll be in stock unfortunately!

Posted on 4 years ago by Brian(@NE_Brian) in Images, New Nintendo 3DS | 0 comments

Just like in North America and Europe, Japan is also getting the Fire Emblem Fates New 3DS XL. Nintendo shared the boxart today, which you can find above. It features male and female artwork of Corrin on both sides.

All units will also come with these Fire Emblem 0 trading cards: 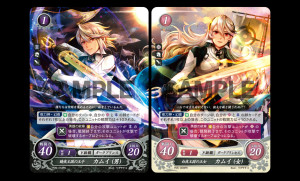 It turns out that the Fire Emblem Fates Special Edition isn’t entirely exclusive to GAME. In addition, Nintendo’s own store is now taking pre-orders here. These should be the only two places where it will be sold.

Pre-order any version of #FireEmblem Fates and you’ll also receive this free Theme featuring the cast of the game! pic.twitter.com/xhWJJy5hN9

In the UK, the Fire Emblem Fates Special Edition will only be available at GAME. That information comes from the retailer’s product page located here. While that may seem like a downer, you might be able to secure a copy at stores outside of the UK since there is no exclusivity in other European territories.

Fire Emblem Fates Special Edition back up on Amazon France

Update 4: Bumped to the top. In related Fire Emblem news, the Fire Emblem Fates New 3DS cover plates are up on Amazon France

Update 2: Fire Emblem Fates Special Edition gone – only lasted a few minutes. The other two items should still be up.

. If either shows out of stock, refresh!

We know what the stock situation was like in North America, so this might end up being tough to find in Europe as well!

Update: Fire Emblem has sold out. Star Fox is still up currently.

If you’re in Europe and still looking for the Fire Emblem Fates Special Edition, you may want to head on over to Amazon Italy. It’s up on the retailer as of this moment. You can place an order here.

The Star Fox Zero: First Print Edition is also up on Amazon Italy. That can be found here.

Nintendo is continuing its developer series based on Fire Emblem Fates. Check out the third episode below called “A Tale of Two Families: Revelation”.

We have a few more bits of information regarding Fire Emblem Fates’ debut sales in the United States, along with data for a crossover 3DS title.

Nintendo confirmed earlier today that Fates sold close to 400,000 copies between Birthright and Conquest in February, with digital sales included. NPD leaker creamsugar puts the games at a combined 315,000 units sold – less than Nintendo’s amount since eShop sales aren’t accounted for here. Birthright sold the most with 44 percent (roughly 138,600), followed by Conquest at 41 percent (roughly 129,150) and the special edition at 15 percent (roughly 47,250).

Moving on, debut sales are in for Project X Zone 2. The game sold 18,000 copies in the United States last month – not counting any eShop sales.

Note that Fire Emblem Fates and Project X Zone 2 did not have a full month of sales since they launched during the middle of February. NPD’s February reporting period ended on February 27.

END_OF_DOCUMENT_TOKEN_TO_BE_REPLACED

Nintendo is continuing its developer series based on Fire Emblem Fates. Check out the second episode below called “A Tale of Two Families: Conquest”.