Posted 10 years ago by Austin in News, Wii | 3 Comments 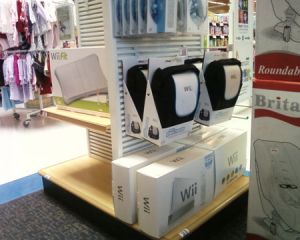 Target stores have begun placing their Wii merchandise (including Wii Fit games, Wii consoles, and Wii accessories) in the toddler sections of their stores. The logic behind this is likely to appeal to the younger demographic of Wii fans, or the appeal of Wii Fit to mothers and their children. In my own opinion, this is a good move to increase sales of Wii products, but I feel that it only adds to the child-like appeal of the Wii, which will further “deteriorate” the system’s image to more serious gamers.

“Right, right. Well we wouldn’t have minded Nintendo at all. But of course, that’s not really their style so… Yeah, of all of the others that we could possibly have gotten, I think that Sega was a very good choice. We had some other offers earlier on, but we obviously passed them by because they weren’t really with us in the spirit of what we were trying to accomplish. What I mean is, there were people who wanted to like, get everything out there as soon as possible and make that quick buck; and that’s just not what we wanted to do with this.” – Rob Nicholls, Lead Game Designer on The Conduit

– Matt did call Bozon about the game and Bozon was pissed
– Not a port, not a Wiimake
– It’s a reimagining
– Designed for Wii
– Start the game similar to the original
– Told to fill out a form for Psych Profile – lasts for rest of the game
– If you said you drink alcohol, might see a bar that’s open instead of a diner
– Character interactions, backgrounds change
– Looks very good
– Better than the flashlight in Fragile, Winter
– “Looks really damn good”
– Frame-rate holds up
– Stylized
– Matt doesn’t mind the character designs
– No weapons – Matt likes the idea
– Environments really good, dynamic, snow effects are great
– When it changes to Nightmare World, it happens dynamically
– Matt was really impressed, psyched for it
– Not bloody but will be an M rated title

– Not coming to America anytime soon
– Matt still trying to get another word from Nintendo but it has been difficult
– Reggie had said that Nintendo is not the publisher of Fatal Frame IV in North America
– “Translated” Tecmo statement: Nintendo, what the hell are you doing? We’re going to call you out and let the fans know it’s your fault, not ours
– Bozon thinks the game would need some changes before it would come out
– Would be a welcomed addition to the library even though it wouldn’t receive the best review score and would be a bit clunky/unchanged
– Real loss for the audience since it appeals to the hardcore player
– Fatal Frame wasn’t a huge seller in Japan

END_OF_DOCUMENT_TOKEN_TO_BE_REPLACED

The Conduit slammed in early preview/score

Gamereactor published a “preliminary analysis” article on The Conduit and essentially slammed the game with a tough score. The magazine gave the game a 2/5 rating, but again, this is based on a preview build. Gamereactor criticized The Conduit for having a weak storyline while also ragging a bit on the game’s controls. Full machine-translated article after the break.