Posted on 6 years ago by Brian(@NE_Brian) in 3DS, General Nintendo, News, Wii U | 8 Comments

A new Miiverse update has gone live for all versions of the social network.

Today’s update brings about four notable changes. The amount of time you need to wait between posting comments has been reduced from 3 minutes to 2 minutes, the character count for posts and comments has been increased to 400, the notifications screen will now display up to 50 notifications, and Your Activity Feed now shows posts that your friends or people you’re following have given a Yeah to.

You can find the full update notes from Miiverse’s Marty below.

END_OF_DOCUMENT_TOKEN_TO_BE_REPLACED 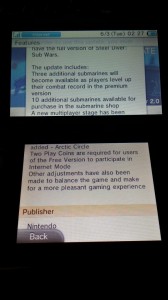 The 2.0 update for Steel Diver: Sub Wars is now available. To obtain it, head on over to the eShop and initiate the patch download. Simple enough!

Disney Infinity updated to version 1.3.0 on Wii U

The Wii U version of Disney Infinity has been given a new patch. Those who own the game should see a 1.3.0 update available. We’re not sure what it does at present, but we’ll let you know if we find any concrete information.

Thanks to Jason for the tip.

Pikmin 3 has been updated, and it brings about a new control option. It’s now possible to use the GamePad’s touch screen to throw Pikmin similar to the setup in Nintendo Land’s Pikmin Adventure. Players can switch between control options in the main menu.

Flowerworks HD: Follie’s Adventure has received a patch in North America. Players will be able to use the Pro Controller or Wii Remote after applying the update, which also implements several fixes.

First patch for Flowerworks HD is now live in North America. Player 1 can now play with either a Pro or Wii Remote, plus more fixes!

We also have a status update regarding Flowerworks HD’s European release:

European release for Flowerworks HD is in submission. Likely to launch early July.

Corcell has prepared a new update for AeternoBlade. If you’ve purchased the game, head on over to the eShop to receive the patch.

AeternoBlade’s 1.1 update fixes several bugs and issues. You can find the full patch notes above.

Grinsia players on 3DS can now get their hands on a title update. It’s short and simple, yet extremely necessary. The update addresses issues players have been encountering regarding a game-breaking bug.

A small update has arrived for Wii Street U. The patch “improves security for more enjoyable gameplay” and “fixes a number of issues to enhance the user’s experience and enjoyment”. Nothing too major, but it’s an update nonetheless!