Nintendo Badge Arcade has been down for a few hours of maintenance today. The downtime has ended, and a new update has been pushed out: version 1.3.1. It takes up 600 blocks of space.

The new version of Nintendo Badge Arcade can be grabbed from the eShop. Alternatively, you can just start the application itself.

Unfortunately, it’s not quite clear what’s new in Nintendo Badge Arcade. There are new badges today and you can participate in a fun little text adventure upon starting the app. You’ll get two free plays as well.

Super Mario Maker has received a new update, bringing the game to version 1.42. Nintendo says of the patch: “A number of issues have been fixed to make for a more pleasant gaming experience.”

354MB of free space is needed to download the update. Note that it’s required in order to access online features.

Minecraft: Wii U Edition’s fourth patch is out today. It makes some notable additions, including the Story Mode skin pack, achievements, support for Wii Classic Controllers, and more. A slew of fixes – along with improvements to sprint control – have been implemented as well.

END_OF_DOCUMENT_TOKEN_TO_BE_REPLACED

Update: The update might be coming tomorrow instead. Despite the trailer saying today (and Bandai Namco UK saying the same thing on Twitter), the press release says tomorrow. Regardless, it’s coming very soon!

After downloading the patch, players can participate in “online mode, training mode to practice your skills and the new extreme survival mode which will push you to the limit”. New Z Assist Characters have also been added in, including Goku Farmer. The update also makes balance tweaks and adjustments to some character moves.

Check out a trailer for the Dragon Ball Z: Extreme Butoden “Extreme Patch” below.

Posted on 4 years ago by Brian(@NE_Brian) in Mobile, News | 11 Comments

A new version of Miitomo can now be downloaded on iOS. Version 1.1.1 fixes several issues, according to Nintendo. It’s a 59MB download.

Miitomo version 1.1.2 has actually been out on Android since Friday. This also fixed a number of issues with the app.

FreezeME patch out this week in North America

Nintendo has approved a new patch for FreezeME in North America, and it should be out within the next couple of days. This makes a few changes/additions to the 3D platformer while also implementing a bunch of bug fixes. The update is already implemented in the European version.

In terms of what’s in store, Rainy Night Creations shared the complete patch notes on the FreezeME Facebook page. You can read them in full below.

505 Games gives an update on next Terraria 3DS patch, release on Wii U

Etrian Odyssey 2 Untold: The Fafnir Knight has received a new update. Within the past couple of days, version 1.1 has been made available.

The new patch is just 23 blocks, or 2.8MB – pretty small indeed. According to Atlus, it fixes a bug with the suspend save.

Miitomo version 1.1.0 out now in Japan with new features

Posted on 4 years ago by Brian(@NE_Brian) in Mobile, News | 3 Comments

Update: We’re also hearing that with today’s update, it’s possible to use a Nintendo Account and sign in with it from territories outside Japan.

Nintendo has brought out a new version of Miitomo in Japan. Version 1.1.0 should be live on iOS and Android.

As we mentioned before, this update introduces a number of new features. To recap, they are as follows:

Miitomo is launching tomorrow outside of Japan. 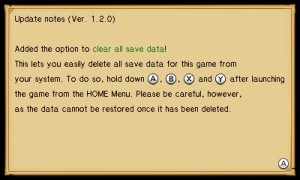 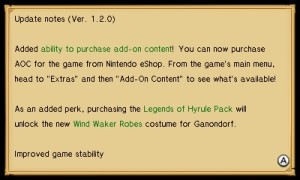