“I am satisfied with the sales of the Wii version to a point, but I don’t think that it really proves the limits of Wii. Monster Hunter Tri is selling well on the Wii after all, but we just are not able to create that kind of content at the moment. To be clear, I’m not admitting defeat. I am constantly striving to ever make better games.” – Marvelous Entertainment head, Yasuhiro Wada

Unfortunately, I don’t recall No More Heroes making a big splash in Japan. On the other hand, however, the game did quite well in North America. I expect that the situation will be the same for the sequel.

MIDLOTHIAN, VA – November 30, 2009 – SouthPeak Interactive Corporation (OTC Bulletin Board: SOPK) announced today it has pinned a new deal to the mat to publish games based on the popular professional wrestling brand Total Nonstop Action and its flagship weekly television program TNA iMPACT!. The new game, TNA iMPACT!: Cross the Line, will be available for PSP® (PlayStation®Portable) systems (including the PSP®go system) and Nintendo DS™ later this winter.

“Their unique take on professional wrestling has captivated a continually growing fan base of millions of people across the world,” said Richard Iggo, VP of Marketing for SouthPeak. “We look forward to giving those fans the opportunity to go head to head with all their favorite TNA superstars on the go, on either the PSP system or Nintendo DS.”

END_OF_DOCUMENT_TOKEN_TO_BE_REPLACED 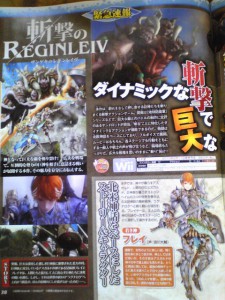 As we already know, this game will be releasing in Japan on February 11, 2010.

Square Enix has announced their lineup for Jump Festa 2010. The event will take place on December 19 and 20.

SEATTLE, Washington – November 30, 2009 – PopCap Games, the leading developer and publisher of the world’s most widely played video games, today announced the launch of Bookworm™ for NintendoDSiWare, a new adaptation of one of PopCap’s most successful franchises and the most popular, multiplatform digital word games in history. Marking PopCap’s entry into the DSiWare™ category, this version of Bookworm delivers the highest caliber of gameplay available in a downloadable title that has been optimized for the Nintendo DSiWare platform. The game is available now at Nintendo’s online shop for 500 DSi Points (U.S. $5.00). Bookworm will be followed by an all-new adaptation of Bejeweled Twist™ for DSiWare later this fall.

“We’re leading our foray into the DSiWare market with Bookworm – a game loaded with deep, classic gameplay action that we believe raises the bar for what should be offered in Nintendo’s online store,” said Ed Allard, vice president of strategic development at PopCap. “We’re bringing quality, value and tremendous fun in this downloadable adaptation of Bookworm that’s sure to provide many hours of enjoyment and challenge to DS players everywhere.”

END_OF_DOCUMENT_TOKEN_TO_BE_REPLACED

REDMOND, Wash.–(BUSINESS WIRE)– Nintendo’s internal tracking numbers show that the company sold more than 1.5 million Wii™, Nintendo DS™ and Nintendo DSi™ video game systems combined in the United States during Thanksgiving Week. That works out to more than 150 Nintendo systems sold every minute continuously for the week – or more than 2.5 every second.

Nintendo estimates that during the week:

END_OF_DOCUMENT_TOKEN_TO_BE_REPLACED

GUILDFORD, England–(BUSINESS WIRE)–Electronic Arts, Inc. (NASDAQ:ERTS) today announced the launch of Foto FaceTM: The Face Stealer Strikes, a new Nintendo DSiWare™ title that gives players the ability to put themselves into the game and sends them on a wild, adventurous quest to reclaim their own stolen identity. Leveraging the unique features of the Nintendo DSi™ system, players use the camera and microphone to capture their face and voice to become an in-game character. Foto Face: The Face Stealer Strikes will be available on the DSiWare store in North America from today, November 30th, and in the rest of the world from Friday, December 4th.

“Foto Face: The Face Stealer Strikes is a great example of how EA is pushing the boundaries of innovative and creative gameplay,” said Harvey Elliott, Vice President and General Manager Casual, EA Play Label. “By using Nintendo DSi features such as the camera, we’ve significantly deepened the experience by allowing players to personalize the adventure in fun and quirky ways that will deliver hours of entertainment.”