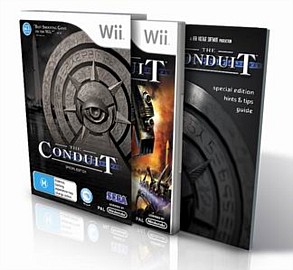 SAN FRANCISCO – May 13, 2009 – Today Ubisoft® announced that it will launch a new title in the Might & Magic universe. Might & Magic Clash of Heroes, a puzzle RPG that was developed by Capybara Games, creators of award-winning handheld and mobile games, will be available on Nintendo DSTM and it will be released in August 2009.

Through five unique and epic quests, players will alternate exploration and turn-based puzzle battles in the game to save the world of Ashan from demonic chaos. Might & Magic Clash of Heroes also adopts a brand new manga-style art design that is perfectly suited to Nintendo DS. In a world populated by knights, elves, wizards, necromancers and demons, gamers can manage their own hero, customize their army and lead campaigns in the mythic Might & Magic world.

END_OF_DOCUMENT_TOKEN_TO_BE_REPLACED

– those that purchase early in Japan will get one of three monster figurines
– rumble-compatible Classic Controller Pro pack for 8490 yen
– limited edition contents: DVD showing ‘making-of’ footage and a the complete orchestra session that was held last week, plus more goodies that are yet to be revealed
– volcano-themed field announced
– New character: Chacha – tribal character that helps you out in single player

LANGHORNE, Pa., May 13, 2009 – Casual games developer and publisher eGames, Inc. (Pink Sheets: EGAM) today announced the ongoing development of The Dracula Files, a new hidden object adventure game franchise pitting a new generation of vampire hunters against the resurrected lord of the undead. With an anticipated launch in late summer 2009, versions of the first installment of The Dracula Files are currently planned for PC, Nintendo DS™, and Wii™.

“We are extremely pleased with the level of enthusiasm our publishing and portal partners have expressed for The Dracula Files since introducing early versions of the game at the Game Developers Conference,” said eGames VP Sales and Marketing Rich Siporin. “We look forward to sharing the game’s progress with casual game fans everywhere through our social media campaign.”

END_OF_DOCUMENT_TOKEN_TO_BE_REPLACED

SANTA MONICA, Calif., May 13, 2009 – Activision Publishing, Inc. (Nasdaq: ATVI), and Nickelodeon today announced a global partnership where the two companies will create an all-new videogame based on the number-one live-action kids’ television show iCarly. Releasing internationally this Fall, the videogame will bring the interactive elements from the series to WiiTM and Nintendo DSTM for the first time.

“iCarly is a groundbreaking show that encourages viewers to contribute content of their own,” said David Oxford, Activision Publishing. “This game is a natural extension of that creativity, and allows players to interact with the characters they know and love through a variety of different ways, any time they like.”

END_OF_DOCUMENT_TOKEN_TO_BE_REPLACED

Posted 11 years ago by Brian in News, Wii | 7 Comments

GoldenEye 007 is one of the most revered Nintendo 64 classics. Many Wii owners would love to see the game hit the VC service, there’s a good chance that may never happen. Martin Hollis admitted to the Official Nintendo Magazine that legal issues could prevent 007 from arriving on the Wii Shop Channel.

“There’s always someone with some exclusivity agreement, so there’s lots of lawyers… I’m not going to hold my breath. I’d love it to happen, but I can’t see it.”

Amsterdam/New York – May 13, 2009 – Playlogic Entertainment, Inc. (Nasdaq OTC: PLGC.OB), an independent worldwide publisher of entertainment software, announced today that it has become an official Publisher for Nintendo of America, Inc.

Playlogic has enjoyed numerous successful Nintendo platform releases in Europe and is pleased to bring new titles to the North American market. It will expand its Nintendo library of titles starting in 2009 and the first games to be released are Pool Hall Pro (Wii™/PC), Vertigo (Wii/PC) Sudoku Ball™ – Detective (Wii/Nintendo DS™/PC), and the 20th Century Fox License Aliens in the Attic (Wii/DS/PlayStation®2 system/PC) based on the upcoming feature film. Launch dates for these North American titles will be announced in the coming weeks.

“Becoming an official Nintendo publisher for North America is very integral to our growth strategy for 2009,” said Rogier Smit, executive vice president of Playlogic. “We have a really strong line-up of titles for the DS, Nintendo DSi and Wii platforms and are confident that our games will be very competitive in the Canadian and US marketplace.”

END_OF_DOCUMENT_TOKEN_TO_BE_REPLACED

The game is set in real-world cities and locations in North America, Europe and Africa such as
• London
• San Francisco
• Washington D.C
• Berlin
• Paris
• Rome
• Cairo