Posted on 4 years ago by Kirara Koneko(@KiraraKoneko) in News, Wii U | 23 Comments

Update: The weapon will be out in North America today. To clarify the times…

A new weapon will be releasing via DLC for Splatoon tomorrow. The latest weapon is an Inkbrush and looks like it can spread large amounts of ink quickly as well as being able to really smack down your Inkling opponents. Check out some more images below.

A new costume based on the Ika Musume (Squid Girl) manga is coming to Splatoon. In August, a free update with the DLC will be released.

This announcement only pertains to Japan at present. We’ll let you know if we hear anything for the west. 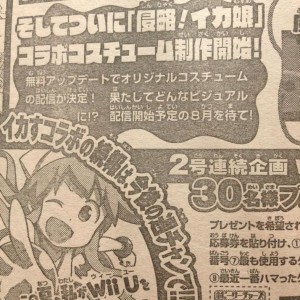 The first collaboration between Splatoon and Ika Musume came in the form of various images. We shared one of those at the top of this post, though you can find the other two here.

Capcom’s June DLC trailer for Monster Hunter 4 Ultimate has leaked out a bit earlier than expected. As a result, we now know which content is coming to the game on Friday.

Capcom is adding a number of new collaborations, including Palico outfits based on Isabelle and Mr. Resetti from Animal Crossing, as well as Dante from Devil May Cry. The special gear designed by Tetsuya Nomura is also on the way. Players can expect new quests and other new items as well.

All of this content launches on June 5. You can check out a trailer below outlining all of the new DLC.

Bike Rider DX 3 players in Japan now have access to new Transformers DLC at the price of 200 yen. If you’re interested in seeing what this looks like in motion, check out the trailer below.

Spicysoft has released the two previous Bike Rider DX games overseas. However, we’re still waiting to see if this latest entry will make it out of Japan.

Even though it’s been less than a week since Splatoon launched around the world, Nintendo is already adding content to the game. The Port Mackerel map, N-Zap ’85 weapon, and Ranked Battle mode have all gone live. In order to participate in Ranked Battle, you’ll need to be at level 10 or higher.

Nintendo will be adding even more content to Splatoon over the next few months. In August, two new matchmaking options will be offered, along with a new battle mode and gear.

Nintendo has revealed a new costume (along with a corresponding hat) for the Mii Gunner in Smash Bros., which is coming to both the Wii U and 3DS versions of the game. This one is based on K.K. Slider from the Animal Crossing series.

In Japan, the costume will be distributed via 7-Eleven between June 19 and July 11. Players will need to visit their local outlet with their 3DS system.

The K.K. Slider costume also seems to be heading west, but the Smash Bros. website simply lists a “TBD” date for its availability.

Update: Bumped to the top. This has now left rumor status, and is now confirmed. A second person has come forward with the guide and notes that the image above is indeed in there. 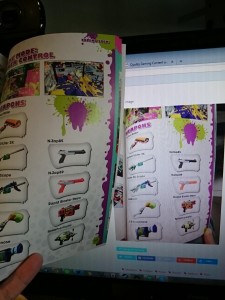 Splatoon will be updated with new content over the next few months. Nintendo will be adding in new modes, maps, and more. Additional weapons are also on the way, and we may have our first look as to what’s planned for the future – including one inspired by the NES Zapper.

The image above is making the rounds on 4Chan and Reddit today. Rumor has it that it’s a photo taken from Prima’s new guide. That guide should be officially released in the very near future, so we should know if there’s any truth to this speculation very soon.

First, new DLC is on the way to Harvest Moon: The Lost Valley. This will include a new bachelor/bachelorette and more.

Natsume’s upcoming GBA games for the Wii U Virtual Console are also still in the pipeline. The first two will be announced “very soon”, and they should release in early June and early July. Six other GBA VC titles are in the works.

Last but not least, Natsume left a tease for its presence at E3 2015. There’s good things to come for both Wii U and 3DS owners, as news will be shared for both of these platforms.

Head past the break for the full breakdown of what lies ahead for Natsume.

END_OF_DOCUMENT_TOKEN_TO_BE_REPLACED

The last portion of Devil Survivor 2: Record Breaker DLC has launched today. Players can get their hands on the Addonetarium free battle, which lets them take on monsters that come with useful Add-ons. These provide extra bonuses during demon fusion.

Last but not least, Atlus prepared one final trailer for Devil Survivor 2: Record Breaker. View it below.