The patch for Super Smash Bros. on both Wii U and 3DS is now available. As previously covered, the patch only applies changes to Bayonetta. To download it, launch the software while connected to the internet.

Video: A look at the Super Smash Bros. amiibo diorama

If you’re in Japan, you can now pick up an amiibo diorama based on Super Smash Bros. (there’s also one for Kirby). Here’s a look at the accessory:

Posted on 4 years ago by Brian(@NE_Brian) in Rumors, Switch | 278 Comments

Rumors about the NX continue to persist. This time, analyst and consultant Dr. Serkan Toto has made bold claims regarding Bandai Namco. The publisher is supposedly working on a number of titles for the system, including Smash Bros. – which will apparently be a launch game. Given that Smash Bros. just came out on two systems a little over a year ago, a port would be more probable than an entirely new entry.

Toto isn’t sure about any dates. In terms of where the information comes from, he’s connected to a number of industry sources, though it remains to be seen if this speculation will pan out in the end.

Bandai Namco is currently developing several NX titles. Smash Bros is planned to be a launch title. I am not sure about the date – yet ;).

To follow up on my last tweet: I haven't heard if it's a completely new (numbered) Smash Bros or not. Otherwise, source situation is solid.

@AutomaticZen Can't say (sorry), but the source situation is very solid. Otherwise I wouldn't have tweeted.

@DaliDimovski Not quite my own reveals, but thanks. About the source situation I can't really talk, but it's solid.

Posted on 4 years ago by Brian(@NE_Brian) in General Nintendo, News | 18 Comments

Yesterday, we posted a number of tidbits coming from a Part Time Gamer interview with Nintendo Treehouse localization writer/editor Chris Pranger. If you missed that, you can read it right here.

Gamnesia has since transcribed Pranger’s comments about Super Smash Bros. director Masahiro Sakurai. Here’s what we said about the developer:

“Sakurai’s outlook on the games is very dire. He gets really sad when he finds out how people are reacting and he gets sad whenever there’s a leak, because he really wants to create. And he’s an auteur in the most crazy sense. He’s basically Vincent Van Gogh cutting off his own ear and we’re sitting there going ‘Frick! Stop doing that!’ And he’s like ‘You don’t get it, guys, my vision!'”

Posted on 4 years ago by Brian(@NE_Brian) in General Nintendo, Videos, Wii U | 0 comments

GameXplain has uploaded another comparison video for Smash Bros. In this latest one, we get to see how Hyrule Castle compares between the Wii U version and N64 original. Watch the video below.

GameXplain put together a new video comparing the Peach’s Castle stage on Wii U to the N64 original. Take a look at it below.

At the upcoming Wizard World Comic Con in Las Vegas on April 24 thru April 26, there will be a Super Smash Bros. Tournament. The Tournament will be held on April 25 at 1pm, and the winner will be awarded a custom metallic Mega Man amiibo. The amiibo was customized by Chris “evilos” Avalos, who has previously made a number of custom amiibo.

Entry to the tournament will set you back $10 and there is limited space available. Good luck to all those who enter!

Update 2: Bumped to the top. Another email has been found. Arad said in one message that Keiko Erikawa, one of the founders of Koei Tecmo, was “instrumental to the Mario deal” – likely because of her relationship with Nintendo. 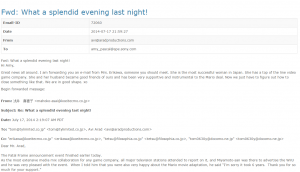 Update: We’ve posted a couple of other email exchanges below. It sounds like Sony was interested in Nintendo’s full stable of IPs!

You may remember that, last year, there was talk about Sony securing the rights to a Mario movie. That news came about due to a leak within Sony – specifically emails between top executives within the company and producer Avi Arad.

As it turns out, Sony wasn’t just interested in Mario. WikiLeaks has now obtained emails which reveal that the company was very much interested in creating a Smash Bros. movie as well. It seems that Arad would have been involved with this film, too.

Just like the Mario movie, specific details are not available at this time. There’s a good chance that both projects will never happen!

Posted on 5 years ago by Kirara Koneko(@KiraraKoneko) in Videos, Wii U | 2 Comments