It would appear that the Wii U version of Batman: Arkham Origins was largely created by Human Head Studios.

It’s true that Warner Bros. Montreal was Origins’ main developer, and the studio may have contributed somewhat to the Wii U release. However, Human Head Studios’ logo is featured on the back of the Wii U boxart. As far as we can tell, there is no similar image on the other versions’ cover. This implies Human Head Studios worked on the bulk of Origins’ development on Wii U.

So that’s a pretty interesting nugget. For those unaware, Human Head Studios worked on Prey, and were once in charge of Prey 2 before there was a fallout of sorts with Bethesda. 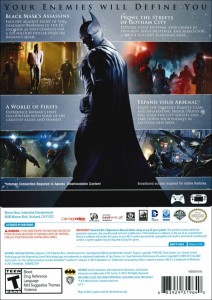 Nintendo has teamed up with Wayne Brady to produce a number of upcoming vignettes for Wii U and Wii Party U. GamerHubTV caught up with Brady, and asked the Whose Line Is It Anyway? performer about his favorite games, Nintendo memory, and more. He sounds pretty knowledgeable about gaming!

END_OF_DOCUMENT_TOKEN_TO_BE_REPLACED

Posted on 8 years ago by Brian(@NE_Brian) in News, Podcast Stories, Wii U | 5 Comments

Super Mario 3D World’s multiplayer looks like a bunch of fun. It’s great and all that you can play locally with three other friends, but wouldn’t it have been nice to tackle the game online with others as well?

Kotaku recently decided to ask Shigeru Miyamoto about the lack of online play in Super Mario 3D World, to which he said the functionality “simply wasn’t the focus for us this time around.” Miyamoto explained that Nintendo was interested in making “something that people could experience fully while playing comfortably with others who were nearby them”.

END_OF_DOCUMENT_TOKEN_TO_BE_REPLACED

Kotaku has discovered some interesting cameos in Batman: Arkham Origins/Blackgate. Due to potential spoilers, we’ve posted the information after the break.

END_OF_DOCUMENT_TOKEN_TO_BE_REPLACED

Nintendo has been cranking out deals on its new UK web store on a regular basis. The latest has consumers pre-ordering the 3DS XL Luigi Special Edition with Luigi’s Mansion 2 for £199.99, resulting in £20 savings. You can check out the offer right here.