Posted on 5 years ago by Kirara Koneko(@KiraraKoneko) in Interviews, News | 20 Comments

END_OF_DOCUMENT_TOKEN_TO_BE_REPLACED

Posted on 5 years ago by Jonathan(@NE_Jarop) in 3DS, Images, News | 3 Comments

When Monster Hunter 3 Ultimate hit the 3DS many people swiftly purchased for themselves a Circle Pad Pro, as the extra analogue stick made navigation in the game much simpler. Third party manufacturer Hori are trying to take this one step further with the Extended Slide Pad controller, creating console like shoulder buttons to make the playing experience closer to a home console. 2 streams of the device will be released, one for the 3DS and one for the XL each for 2 980 yen. An accessory kit is also on the way featuring a cleaning cloth, strap and decal for 2 180 (3DS version) and 2 2280 yen (XL version). Check out the accessories below and let us know what you think!

3DS accessory Save Bank backs up save data to PC

Posted on 5 years ago by Jonathan(@NE_Jarop) in 3DS, News | 2 Comments

Third party manufacturer Cuber Gadget are releasing an accessory to back up 3DS save data off carts to your computer. It’s an interesting concept, allowing you to store all your 3DS data in case you lose your physical carts for whatever reason and need to restore them to another. At present it’s coming to Japan on June 8th for 3,300 Yen with no Western release as of yet.

Posted on 5 years ago by Austin(@NE_Austin) in 3DS, 3DS eShop, Features, Reviews | 2 Comments

Almost three thousand years ago, a shy fellow (I don’t know if he was shy) named Homer lived in Greece, and he wrote two really famous epic poems: The first– The Illiad— is thought to be the oldest surviving piece of western literature ever. The second– The Odyssey— is just as famous, and this week, nearly three millennia after its initial writing, The Game Bakers have created a work directly inspired by the work of Homer for the Wii U eShop. It’s called Squids Odyssey.

Most of what is written in the paragraph above isn’t true. Squids Odyssey does exist, but it’s not a game based around Homer’s Odyssey— no, it’s a creative and unique turn-based strategy game set far beneath the surface of the ocean that’s unfortunately marred by a lack of technical polish and attention. Still, it may be worth your time; read on for details.

END_OF_DOCUMENT_TOKEN_TO_BE_REPLACED

Posted on 5 years ago by Spencer(@spencerstevens) in 3DS, Features, Reviews | 8 Comments

END_OF_DOCUMENT_TOKEN_TO_BE_REPLACED

Posted on 6 years ago by Patrick(@Patricklous) in 3DS, Images, News, Screenshots | 1 Comment

Here’s the Prism Tower stage for the 3DS version! The battle begins on ground level right in front of the tower.

END_OF_DOCUMENT_TOKEN_TO_BE_REPLACED

Posted on 6 years ago by Patrick(@Patricklous) in 3DS, Images, News, Screenshots | 1 Comment

Smash Bros. series director Masahiro Sakurai sure seems to be revealing a lot of 3DS exclusive stages lately. Today’s scheduled update to the Super Smash Bros. Director’s Room on Miiverse showed off a brand new arena – Lumiose City from Pokémon X/Y. It might not have the massive skyscrapers and randomly appearing Pokémon from Saffron City, but it sure beats another Pokémon Stadium. Sakurai had this to say about the new addition:

The Prism Tower rises above Lumiose City. Up until a few seconds ago, the fighters were brawling on top of that tower. No, really.

Posted on 6 years ago by Patrick(@Patricklous) in 3DS, Images, News, Screenshots | 4 Comments

Along with this image, director Masahiro Sakurai used Miiverse to fill everyone in on a few neat additions to Little Mac’s moveset. Sakurai posted:

The trick in activating these punches is to avoid tilting the controls diagonally from the get go–instead, tilt up or down right after the smash attack starts kicking in. You can also tilt up or down while you’re powering up.

Posted on 6 years ago by Patrick(@Patricklous) in 3DS, News, Platforms, Screenshots | 0 comments 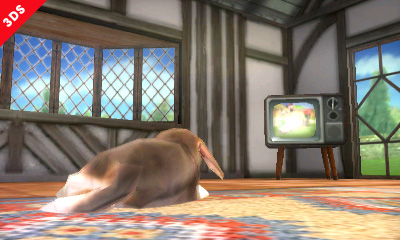 Along with today’s screenshot of the 3DS version’s Nintendogs stage, director Masahiro Sakurai posted the following message on Miiverse:

Pic of the day. A bored-looking dog staring at the TV… Occasionally, the Super Smash Bros. series really makes me confused about what I’m creating.

Posted on 6 years ago by Austin(@NE_Austin) in 3DS, Features, Reader Poll, Wii U | 8 Comments

This is a survey that requires no signing up, accounts, clicking through ads, or anything. Just answer a required question, answer a non-required question (if you want) and make your voice heard in yet another NintendoEverything reader survey poll thing! Results will be read on the next podcast! Thanks very much.

Thanks very much. As stated above the topic for you guys this week is “What are the best games of the year on Wii U and 3DS?” Check out two small questions in there.

Take the survey here! (more details inside if you’re confused)

More: 3DS, Game of the Year, highlight, wii u