Posted on 2 years ago by Matt(@OnePunchMaz) in News, Switch | 33 Comments

Super Bomberman R just received a fairly major free update, but Konami is already looking ahead to what’s next for the game. The company revealed that in a future update, three characters from classic Konami franchises will be added to the game: Simon Belmont from Castlevania, Pyramid Head from Silent Hill and Vic Viper from Gradius.

END_OF_DOCUMENT_TOKEN_TO_BE_REPLACED

Super Bomberman R frame rate comparison – before and after version 1.3

Posted on 2 years ago by Brian(@NE_Brian) in Switch, Videos | 4 Comments

Some are claiming that Super Bomberman R runs at 60 frames per second with version 1.3. We’ll probably need an analysis to verify that, but there’s no doubt that it runs at a faster rate.

Posted on 2 years ago by Dennis(@LyonHart_) in Reviews, Switch | 30 Comments

Two years ago, I wrote an article on my relationship with Mario Kart and how Mario Kart 8 revitalized the series. In making that game, Nintendo reignited the magic I used to feel towards the franchise during the N64 and GameCube days. Mario Kart 8 shed a whole new light on kart racers and the potential they had at a time where most felt stale or rehashed, with Sonic & All-Stars Racing Transformed being the new “king” of that genre before Mario Kart 8 returned to reclaim. Now in 2017, we’re back with the definitive version of one of Wii U’s best titles on its successor, the Nintendo Switch, with Mario Kart 8 Deluxe. It’s as extravagant and beautiful as it was on Wii U, but this time with a revamped battle mode, all DLC included, a few new features, and plenty to love all over again.

END_OF_DOCUMENT_TOKEN_TO_BE_REPLACED

Posted on 2 years ago by Brian(@NE_Brian) in News, Switch | 10 Comments

Update: Added in the full patch notes after the break.

Original: Super Bomberman R’s next update is here. Version 1.3 is now available for download for all players worldwide. If you have a copy of the game, you may even see it download automatically.

Today’s Super Bomberman R is highlighted by the addition of a new map. Konami also made further refinements to the controls and difficulty.

We’ll pass along the full patch notes once we have them.

END_OF_DOCUMENT_TOKEN_TO_BE_REPLACED

Posted on 2 years ago by Zack in Switch, Videos | 5 Comments

YouTuber iJustine was greeted by an unexpected guest in a recent video, along with getting early access to Mario Kart 8 Deluxe. While Mario doesn’t stay for most of the video, it does contain plenty of new footage for the game. Check it out below.

Video: How to Unlock Gold Mario in Mario Kart 8 Deluxe

Posted on 2 years ago by Zack in Switch, Videos | 9 Comments

A video posted by GameXplain has detailed the process for unlocking Gold Mario in Mario Kart 8 Deluxe, and provides a look at the new character in action.

Check out the video below.

Posted on 2 years ago by Brian(@NE_Brian) in News, Switch | 54 Comments

Nintendo has previously said that Switch is its fastest-selling system ever. More information is provided by the NPD Group today.

According to analyst Sam Naji, “Switch had the biggest hardware launch for a Nintendo platform and the second biggest launch for any video game platform since 1995, the time NPD began tracking this category.”

END_OF_DOCUMENT_TOKEN_TO_BE_REPLACED

Posted on 2 years ago by Brian(@NE_Brian) in News, Switch | 17 Comments

NPD Group has released a listing of the top twenty best-selling games in the U.S. for the month of March 2017. The results can be found below. 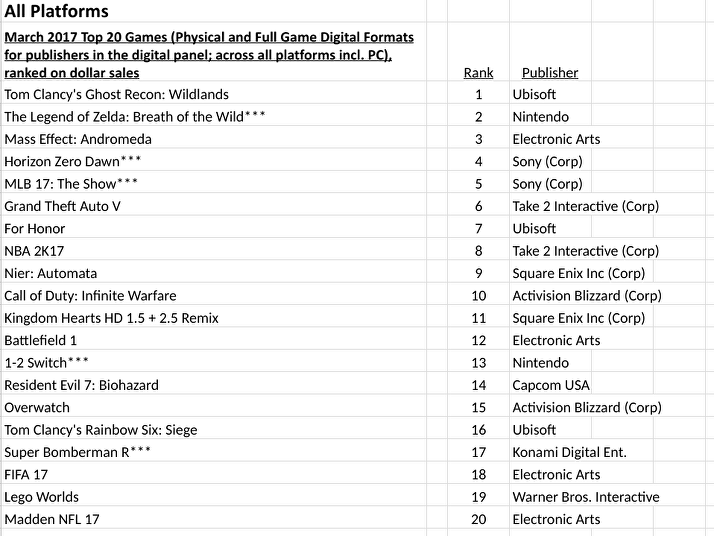 Fatal Fury is the new NeoGeo game on Switch having launched across North America, Europe, and Japan. Take a look at some footage below.