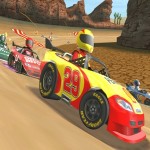 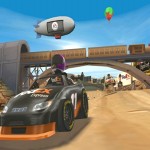 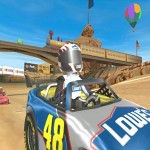 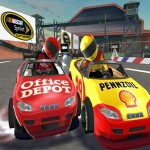 Experience the Thrill of Team Racing on and off the Track

REDWOOD CITY, Calif. – December 4, 2008 – Electronic Arts Inc. (NASDAQ: ERTS) announced today that NASCAR® Kart Racing, the first and only NASCAR racing title available for the Wii™, will ship to retailers in North America on February 10, 2009, just in time for the Daytona 500 and the official start of the 2009 NASCAR season. Designed exclusively for the Wii, NASCAR Kart Racing enables players to grab the steering wheel as a famed NASCAR Sprint Cup Series driver and speed through treacherous landscapes, wind around rocky cliffs, jump rivers and dodge falling boulders. Up to four players can go head-to-head, via split screen, in a mad dash to the checkered flag, making NASCAR Kart Racing an ideal game to play with family and friends.

Enjoy the thrill of racing as three-time consecutive Sprint Cup Series champion Jimmie Johnson or choose from 13 additional NASCAR Sprint Cup Series drivers. Players can also compete as one of 10 original animated characters. Each driver has personal attributes that will determine how the kart will perform on a course, so strategy is key when choosing a driver and a teammate. Teams that work together win championships!

END_OF_DOCUMENT_TOKEN_TO_BE_REPLACED

To move in the game – you have to jOG!

Liverpool, 26 November 2008: New Concept Gaming Ltd, a company dedicated to the development and sale of ground breaking products bridging the video game and health and fitness industries, today announced that its first product, jOG™ is now on sale. Compatible with existing games consoles and games, jOG is an accessory that enables gamers to enjoy their favourite titles with a fun, immersive control mechanic at the same time benefitting from aerobic exercise – quite simply, if you want to run in the game you have to run on the spot to go.

In the basic mode of operation, the user plays their game in the normal way but with one significant difference. jOG detects when the player takes a step and only allows movement in the game while the player is jogging on the spot. Direction and all the other functions are still controlled by the standard gamepad. Using this simple approach, the team at New Concept Gaming has created a very powerful visual feedback loop bringing players deeper into the game experience and compelling them to take light exercise for the duration of game play without affecting the balance of gameplay.

END_OF_DOCUMENT_TOKEN_TO_BE_REPLACED

Microsoft is competing with Nintendo and Sony in Japan

“We continue to focus tremendously internationally, Europe in particular is a very big area of focus for us. Japan has always been an important market for us. That’s an interesting challenge because you’re competing with Sony and Nintendo on their home turf there”. – Microsoft’s Shane Kim

Suikoden rolls on to DS

Suikoden Tierkreis casts the player as a member of a tightly knit security force in a remote setting called ‘Citro Village’. During an ongoing task to get rid of the land’s fearsome creatures, players uncover a mysterious phenomenon… a light emits something inexplicable at the top of the tower in the old ruins. From then on, the player and their comrades’ destiny begins to change…

The Nintendo DS title boasts a cast of 108 fully interactive characters. Each will work independently of the others, but can be recruited to make a four-person party, ideally suited to the tasks ahead. Each character enjoys a detailed history which is unfurled as the game progresses, with voice-overs and animated sequences fleshing out their many stories. From these, players than assemble their team to utilise the various skills on offer, while weapons such as swords and bows can be equipped and customised. Together, they are then pitted in turn-based battles against the many hostile creatures that lurk within Suikoden Tierkreis.

END_OF_DOCUMENT_TOKEN_TO_BE_REPLACED

“In a sense, we want to take this as a chance to reintroduce the American public to what Monster Hunter is.” – Monster Hunter 3 producer Kenji Tsujimoto

This comment from Mr. Tsujimoto is a good sign about the chances of Monster Hunter 3 in North America. Nothing is concrete yet, though I’m sure many gamers – myself included – are pulling for the title to be brought over.

XSEED talks Winds of Nostalgio, Fragile, and much more

All of the information below comes from an XSEED email response…

Shiren 2 (Sega, DS)
– Sorry, not going to happen. We would surely lose money on Shiren 2 due to lack of interest at retail.

Knights in the Nightmare (Sting, DS) (I assume that this is Atlus’ territory though)
– You’re correct, Sting has some well-established partners already in the US so it will be up to them to decide to bring this title or not.

Winds of Nostalgio (Tecmo, DS)
– This is coming to the US, perhaps not by us but it will make it over.

Sky Crawlers (Namco, Wii)
– Seems like an interesting game, thanks for the suggestion. We’ll look into it.

Fragile (Namco, Wii)
– Seems interesting though we don’t know enough about it. We’ll keep an eye on it.

Puyo Puyo 15th Anniversary (Sega, DS seems to be the preferred one, and please of course make it the fixed version!)
– We will not pursue this title. The “casual audience” this game caters to is not our strong point.

All Tales games
– We would love to work on any Tales games (especially the ones that have never made it to the US before in any form such as Rebirth and Destiny 2), but as you can imagine this is extremely difficult to license.
Questions/Responses

1. But is the Little King’s Story box art the final one, and is it the same as the not seen Japanese box artwork?
– No, we have not released the final box art to the public yet.
2. And is Rune Factory Frontier’s NA box final? Can’t you or MMV USA (who’s responcible for this?) to make it just like the JP box in placement, and then just add the sky?
– I don’t know what box art you’re talking about, but the US one will likely be similar to the Japanese.
3. One more thing? Are any of MMV’s upcoming Wii games that you’re bringing over have any NA-exclusive content, whether you can share that or not is fine.
– We always try for exclusive US content, but oftentimes it’s difficult due to scheduling issues. Nothing has been confirmed yet.